It’s only a bit of gum disease… isn’t it?

Holland Park Dental / Periodontics and Oral Hygiene  / It’s only a bit of gum disease… isn’t it? 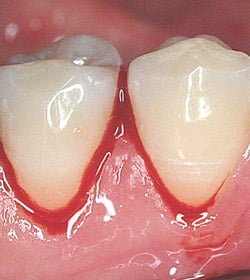 It’s only a bit of gum disease… isn’t it?

Up to 9 in 10 people in the UK have some degree of gum disease; signs can be as small as a touch of bleeding when brushing – which is widely ignored.

However, unhealthy gums can eventually cause your teeth to lose support and become unstable, which can lead to tooth loss.

Gum disease such as Gingivitis can lead to a much more severe and irreversible disease called Periodontitis.

The good news is, that with appropriate dental recalls and a thorough and knowledgeable oral hygiene regime, you can tackle gingivitis and prevent it from ever developing into something more serious. 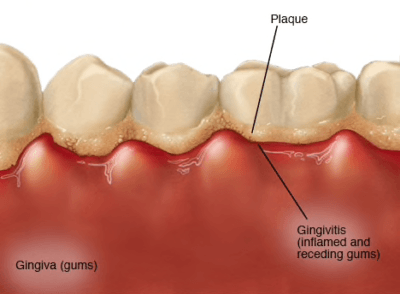 Signs and Symptoms of Gingivitis

When does gingivitis become Periodontitis?

All the while it is the gums that are inflamed the disease can be halted and returned back to a normal, healthy state. Once the plaque that is causing the irritation and swelling is removed the gums begin to return to their healthy positions, the inflammation is reduced and the risk of worsening problems is removed.

However, if the plaque is not removed your body reacts to protect itself from the bacteria. Imagine standing at a bus stop, there’s an irritating commuter leaning on you – you’ve put up a good fight and shoved back a few times but the irritation persists so you decide to get away from the irritation and you take a step back. Your body does the same. The persistent and chronic presence of plaque and bacteria irritate your gums to a point that your bone (which holds the gums where they are) takes a step back. It begins to recede, sometimes leaving the gum where it is, causing what’s called a pocket. Pockets can be tricky! And your gums need assessing and maintain to prevent and manage these pockets – this is because they can be a pesky place for bacteria to get trapped, sadly no amount of brushing will fish out the bacteria from inside a pocket.

Pockets are the first stage of Periodontitis.

Signs and symptoms of periodontitis 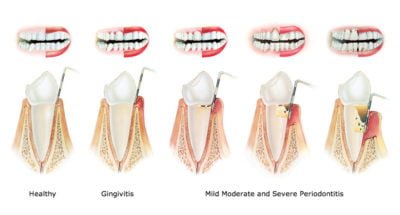 There are various stages of periodontitis, so it is important to see your dentist and hygienist regularly to ensure it isn’t something that’s developing.

Something else and more acute to consider is the direct link between your gum health and your heart health. The bacteria found in plaque, if it makes its way into your bloodstream, can put your heart at risk of endocarditis and the rest of your body at risk to diseases such as dementia. Read here to find out more about the links between your oral health and your general health.

If you’re worried about the health of your teeth and your gums or you have noticed that you have a few of the symptoms of periodontitis you can book to see our specialist periodontist, Dr Ruben Garcia.

Sorry, the comment form is closed at this time.